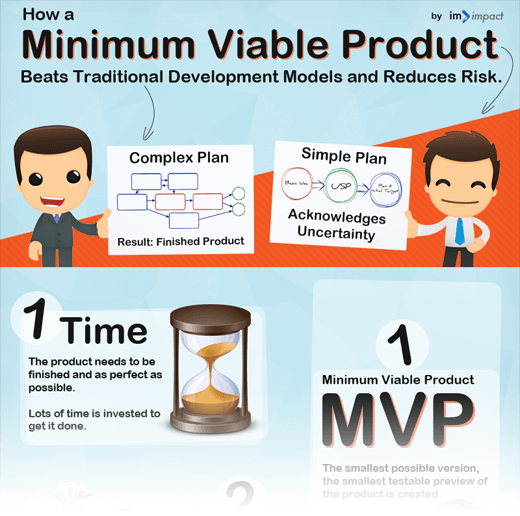 How to Launch a Tech Startup in 2016 Part 4: Launching Your Startup With a Minimum Viable Product

Part 4: Launching Your Startup With a Minimum Viable Product

Running a “responsive” startup requires a different kind of thinking from that of the old-school business model. Rather than spending a year or more trying to “perfect” your product (or service) before it’s released — in the hopes that, if you make it really really awesome, the market will love it and eat it up — you’d be well advised to develop your creation in collaboration with the market itself.

Wouldn’t it be nice to know that the market even wants what you’re trying to create, before you start investing all your time and money into it? Wouldn’t it be easier to develop something that the market really wants, if you were getting feedback at every step along the way of the development process? These are the kinds of concerns that have led to the rise of a new kind of business model, where you launch first and develop later.

Instead of trying to do all your development “behind the scenes” before you release your offering to the world, go ahead and release it as soon as you possibly can. “But how,” you may ask, “can I release a product or service that doesn’t even exist yet?” Indeed, you do need to have something to offer to the market, and it obviously has to be more tangible than just an initial idea. That something is what we now refer to as an MVP, or minimum viable product.

A minimum viable product is basically the simplest version of your offering that you can create in order to test the market. If developing your idea into a full-scale product/service would have taken 300 days + $10,000, but instead you invest 3 days and $100 into developing an MVP to see if the market is even interested in your product in the first place, then you have avoided 99% of the risk of starting a new business. If, after releasing your minimum viable product, you find that people are interested in paying money for your MVP, then you have validated your idea, and you can move forward with the confidence you’ll need to raise capital and commit your time to the project. If, on the other hand, nobody seems interested in paying for your product, then you know that it’s time to re-evaluate your idea, change it up a bit, maybe do something completely different, or shut it down completely before you waste any more time and money on a business that’s just not going to work.

At FVI, our philosophy is that the best way to understand a new concept is through real-life, practical examples. Two of the most famous examples of successful MVPs are zappos.com and dropbox.com.

Nick Swinmurn, the founder of zappos.com (one of the world’s most successful online shoe stores), didn’t start out by spending months developing the website, hundreds of thousands of dollars leasing storage space and stockpiling shoes, etc. His investors weren’t convinced that people would be willing to buy shoes online without being able to try them on in the first place (nor, indeed, was he), so he decided to test the market with a very simple MVP. He went to his local shoe stores and took photos of all their merchandise. He uploaded them onto a very simple website and allowed people to make purchases. When he received an order, he went to the store himself, purchased the shoes, and shipped them to the customer. Obviously this wasn’t a very good business model in itself, but it validated the hypothesis that people would buy shoes online. Armed with this knowledge, Swinmurn was able to gather the support he needed to turn zappos.com into a billion-dollar company.

Drew Houston, the founder and CEO of dropbox.com, didn’t start his company by coding up a storm and creating a robust web app with a back-end infrastructure capable of seamlessly sharing large files between different kinds of computers, smart phones, and operating systems. That would have taken dozens of coders, thousands of hours, and hundreds of thousands of dollars. Instead, he and his team created a simple, three-minute “explainer video” and published it on Hacker News:

People liked the idea so much that dropbox’s mailing list grew from 5,000 emails to 75,000 in a single day.

Many other new-school startups have used minimum viable products to great success. Check out this article for example, about how the founder of buffer.com validated his idea with a simple landing page, before he had even finished creating his web app. Crowdfunding platforms like kickstarter.com are full of great MVP examples as well. If you’re thinking about launching a startup in 2016 and want to do it with an MVP, Kickstarter can be a great place to start. Not only can you use Kickstarter to validate your MVP, but it can actually bring in the funding you need in the process.

Using a minimum viable product is a vitally important step in launching your startup in the safest way possible. However, it serves another function as well, that is arguably even more important than mitigating your risk: it starts your company off in collaboration with the market, so that your creative process can develop as a dialogue rather than a monologue. This “responsive” way of doing business, where the market itself is an active participant in deciding the direction of the company, is crucial to achieving (and maintaining) product/market fit, the holy grail (indeed the very raison d’être) of any successful startup company. To learn more about How To Launch a Tech Startup in 2016, join us next week for “Part 5: Iterating Toward Product/Market Fit.”

In the meantime, check out this awesome infographic about the importance of using an MVP to launch your startup: