Glassdoor just released its annual Job Market Review for 2016, along with its Trends for 2017 report. If you’re thinking about getting into a new career in 2017, you’ll want to take a few minutes to read through this overview.

Glassdoor has a huge amount of data about the job market. It is, after all, one of the largest jobs & recruiting sites in the world. You may be surprised to see that even though Glassdoor doesn’t usually focus on tech (since it is focused on the job market as a whole), its 2016/2017 Job Market report puts a lot of emphasis on how tech is changing the job market, and the economy as a whole.

Overall, the report focuses on general trends, like “the economy is doing well,” and “unemployment is falling.” Since the focus is very big-picture, there is very little mention of specific jobs or industries. Only six specific jobs are noted for being in high demand. Three of them are in tech. Of the ten big-picture sections in the Glassdoor report, three are focused on the way that tech is changing the job market.

For anyone looking to get a new job this year, the bottom line of the report says it all: Workers and employers can prepare for the future by investing in technology and skills that will help them innovate and succeed far beyond 2017.

Let’s take a closer look at some of the specific findings in the report.

Unemployment has been falling for six straight years. 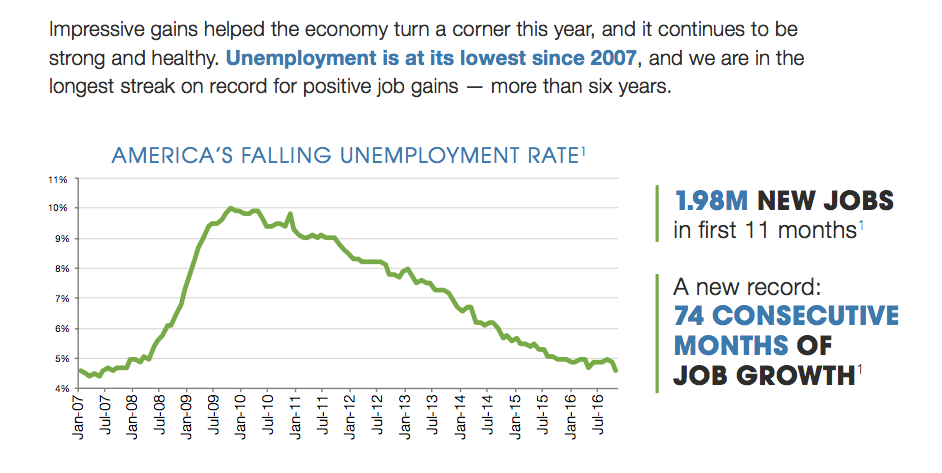 Companies are competing for employees; it’s a great time to be looking for a new job. 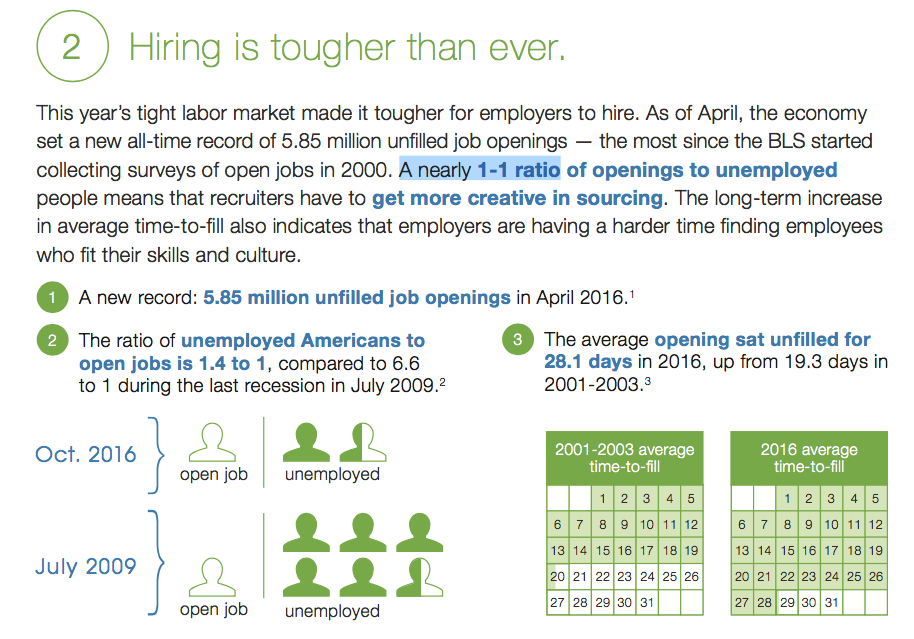 If you’re rooting for the average American worker, the numbers above are very encouraging. Unemployment has been falling steadily for the past six years, and is at its lowest rate since 2007. There are so many job openings available that companies have to compete for workers. This is all very good news for American workers. If you’re thinking about finding a higher-paying job or switching into a new career, 2017 might just be your year. There’s a big market out there for you, with lots of job opportunities and not too much competition.

Coders are needed in every industry. 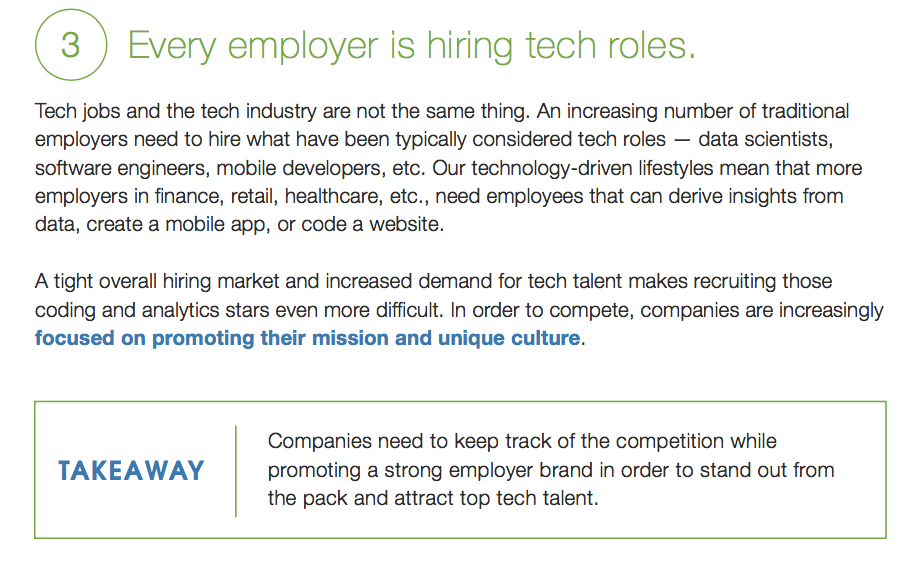 Section (3), above, is the only full section in the entire report dedicated to how one skill-set is changing overarching, large-scale economic trends. We at FVI have been writing for years about how tech jobs are no longer confined to tech companies. Every company needs tech people. Sometimes words like these can seem like hyperbole when they’re on the blog of a vocational school that teaches people how to code. When Glassdoor dedicates an entire section of its report to the proliferation of tech jobs, with a bold & conclusive headline like “Every employer is hiring tech roles,” it may be time to sit up and take notice. This is not a company that’s trying to get people to learn to code; it’s an organization that’s publishing a report for employers to know and understand the job market better.

As we head into 2017, we seem to be at a turning point, where companies, all across the country and in every industry, are realizing that they can no longer get by without hiring dedicated, skilled tech employees.

Perhaps the best news from this report, for people who want to get into a new career in 2017, is that companies are competing even more intensely for skilled coders than they are for workers with other skill-sets. While learning to code may seem like an impossible challenge at first glance, it is actually fairly easy (and fun) if you have a good teacher to help you.

Automation is disrupting every industry.

Automation is another thing that we at FVI have been talking about for some time. Entire industries have already been replaced by robots and AI, and many more are soon to fall. The only way to avoid being swept away by this tide is to learn to code. As the old saying goes, “if you can’t beat ’em, join ’em.”

But jumping into building robots and creating Artificial Intelligence may be a difficult way to transition into a tech career. We might recommend starting with some simple Web Development instead. It’s much easier and faster to get started. By starting with HTML, CSS, and JavaScript, you can build your confidence. Once you’ve mastered the basics, you may be able to jump into more advanced skills like AI and robotics.

HOW TECH IS REVOLUTIONIZING SPECIFIC INDUSTRIES

In another section of its report, Glassdoor focuses on the transformation (one might say “disruption”) of the HR industry. HR is just one of countless examples of an industry that is being completely revolutionized by tech. Instead of relying on old-school intuition and educated guesswork, HR is now leaning heavily toward statistics, data, and cold hard facts to make the best possible hiring decisions.

All of this means, in the end, that HR departments will be hiring more workers with tech skills. The ability to read and write code, speaking the language of computers, is becoming a job requirement in this, and many other industries.

WOMEN IN THE WORKPLACE 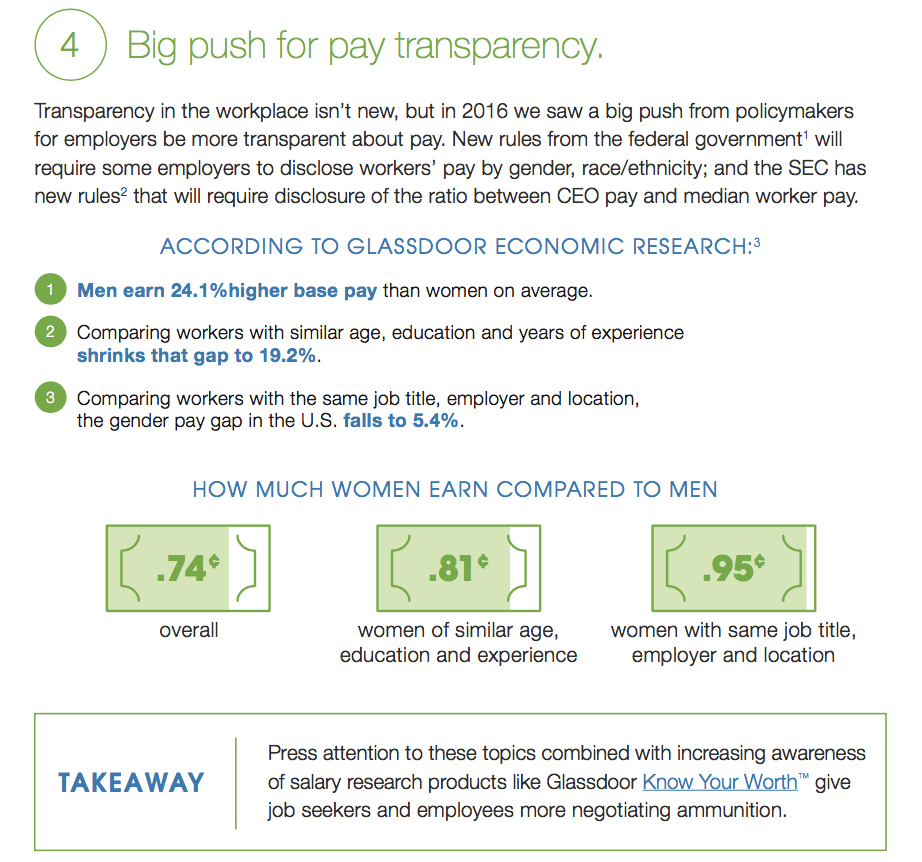 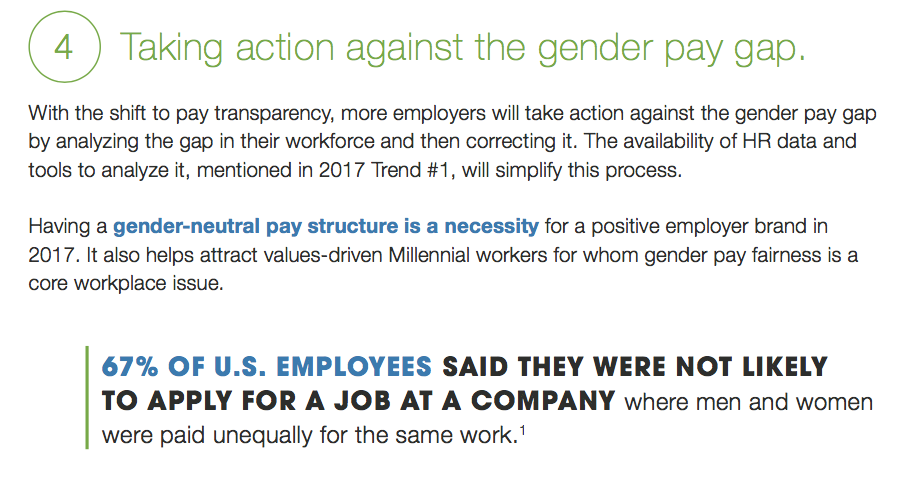 Some good news on the gender-equality front! 2016 was a great year for pay transparency, and 2017 is looking like a big year for leveling the playing field for people of all races and genders. The fact that employers are now required to be open about their gender/racial/executive payment ratios can only help to keep them honest in the long run.

Improving diversity in tech is not only good for women and minorities, but for the country as a whole. There is an abundance of unfilled tech positions, and we need all hands on deck. Moreover, female and minority coders bring in new perspectives and ideas. Their inventions end up improving the lives of millions of people across the country. Moving toward transparency in 2016, and away from gender pay disparity in 2017, are huge steps in the right direction.

2016 was a good year for the US economy; bolstered, in large part, by tech jobs. Unemployment has been falling at record rates. There are now nearly as many job openings as there are unemployed Americans. 2017 will be a great year for people who want to get new jobs, or trade up from their current positions; especially if they’re willing to learn some coding & tech skills.