According to Business Insider, the top five fastest-growing tech careers are:

While there’s a lot of talk about the boom in demand for Data Scientists, not much is said about the out-of-control demand for web developers. At 27% growth, Web Developer jobs are growing, in the words of the Bureau of Labor Statistics, “much faster than average.”

Every single company in America today needs a web developer (or three) to build (or modernize) their websites, build their web apps, enhance their web presence, extend their reach, and improve their brands.

Web developer jobs aren’t just growing quickly in relation to other tech jobs; they’re up there in the top 25 fastest growing professions out of all of the thousands of professions in the BLS’s database.

This is very encouraging news for anybody who wants to get into tech but doesn’t necessarily have 4+ years to invest in a computer science degree. While becoming a data scientist (for example) might be extremely difficult without devoting years to studying computer science, anybody with a laptop and an internet connection can become a web developer in a matter of months. Here at FVI, we even offer an evenings-only program, where students with no prior tech experience can become employable web developers in nine short months, in their spare time.

If you’re going to get into tech, you’re going to need to learn how to code at some point. Many people feel overwhelmed by all of the options. Should I learn Python? Ruby? C++? JavaScript?

Of course, the language you choose to learn will have a lot to do with what you want to do with it. For example, if you want to be a web developer, you’ll most likely want to learn JavaScript, since JavaScript is the language of the web. If you’re planning to create a new operating system, on the other hand, you might want to learn C++; or if you’re planning on doing a lot of Android app development, you’d prefer to go for Java.

Overall, though, what is the fastest-growing programming language of them all? Taking a look at the languages that are gathering the most steam can help us to see the bigger picture of where the general tech market is going.

New York based software engineer and data scientist Nathan Epstein crunched the numbers, and has ranked the fastest growing languages as follows: 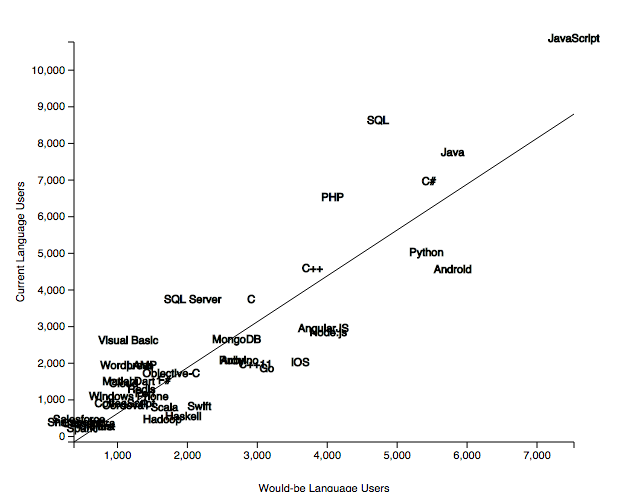 Everyone wants to have it all; a fun job, a great income, and lots of leisure time to spend with family and friends. Unfortunately, in this day and age, the best most people will be able to achieve is some compromise between those three desires. Fun jobs tend not to pay very well, and high paying jobs often require 60-70 hour work weeks.

Tech is known as an industry where workers tend to go “all-in” on their projects; eating, sleeping, and breathing code, 24/7. One might think that tech jobs would tend to have a below-average work-life balance. The truth is, though, that according to Glassdoor’s empirical research, tech jobs are actually ranked quite highly for work-life balance.

In a report published in October 2016, five of the top ten jobs for work-life balance in 2016 were, in fact, tech jobs! Of the top 25, ten were tech careers (all numbers courtesy of Glassdoor.com):

Only a few of these jobs require a Bachelor’s degree, let alone any advanced (master’s/doctoral) degrees. Starting out by practicing simple web development techniques, one could progress to become a UX/UI designer, a PHP developer, a web designer, or even a scrum master, devops engineer, or mobile developer.

Whatever one chooses to do within the field of technology, it’s good to know that workers with tech skills tend to have better work-life balances than the over-worked, under-played population at large.

Remarking on the astounding dominance of tech companies in this list, Glassdoor’s Chief Economist, Dr. Andrew Chamberlain, said, “In technology, we continue to see unprecedented salaries as the war for talent is still very active, largely due to the ongoing shortage of highly skilled workers needed.”

We’ve been saying exactly the same thing, for years, here at FVI. Demand for tech workers is growing every year, and there just aren’t enough coders to fill the job openings. That’s why we created our 9-month, evenings-only Web Developer program, right here in the heart of Miami. There are hundreds of thousands of people here in Miami, many of whom don’t have college degrees and are working multiple jobs just to make ends meet. We’ve made it our mission to bring these in-demand technical skills to the people who need it the most.