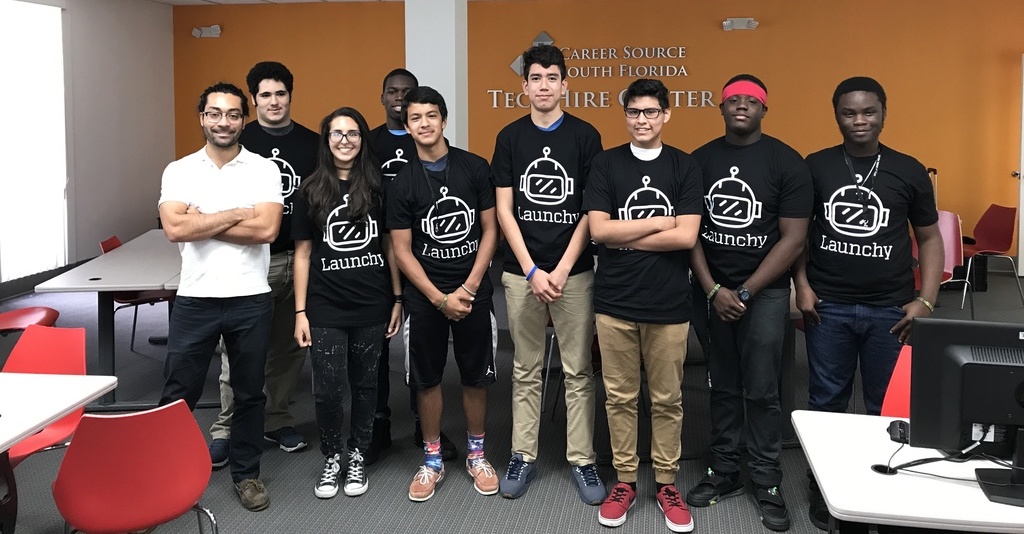 TechHire Bootcamps Off to a Strong Start

Led by the public-private partnership of CareerSource South Florida and TechLaunch @ FVI School of Nursing and Technology, the bootcamps are already off to a great start. Within just a week of starting, nearly 90% of students in the Homestead bootcamp have already completed their CyberSafe certifications. This was the first round of certifications for the bootcamps, which are themselves the first round of TechHire programs in Florida. These initial positive results are a welcome sign of what we can look forward to over the coming months. They may also herald an infusion of fresh new energy into Miami’s burgeoning tech community for many years to come.

The students that have come into the TechHire program so far have entered with varying levels of technical skill. Some enter with little or no computer skills at all. Others have entered their TechHire bootcamps with more advanced technical skills and interests already under their belts.

Jasmine Williams (third from left), has been learning game design for two years at Homestead Senior High. She joined Homestead’s TechHire bootcamp in order to build on those skills, and learn more.

Other students are approaching these bootcamps as their first introduction into the world of tech. For these students, the TechHire bootcamps can be especially powerful. Many come from communities where tech education is uncommon, and tech jobs seem distant and out-of-reach. By gaining real certifications in a matter of weeks, students begin to feel more confident about their tech skills. Inspiring this kind of confidence, in students who otherwise wouldn’t have even thought about going into tech, is one of the chief objectives of the TechHire initiative.

As TechHire Co-Chair Arnie Girnun puts it, “There is often a barrier, where people don’t understand what’s involved in a tech career, so they’re not sure if that can do it.” These bootcamps aim to help students “find that spark of interest in technology” within themselves. “Most importantly,” Girnun continues, “what we are doing is helping them realize that they can do it.”

The TechHire bootcamps have been split into several cohorts, in local high schools throughout South Florida.

CyberSafe, A+, and Network+ Certifications

Only one week into the course, seventeen out of nineteen students at the Homestead bootcamp have already passed their CyberSafe certification exams. This is very encouraging news, and bodes well for the rest of the program.

Today, these students are equipped with the skills to navigate a hazardous world of hackers, phishers and spam-bots. Next, they will move on to begin working on their A+ and Network+ certifications. Through these IT courses, students will be able to understand how computer hardware, software, and operating systems work. They will learn how to work with and repair computers. These certifications will give them a foundation that can help them get jobs in the field of Information Technology.

IT professionals often command impressive salaries in high-tech cities like Miami. According to Glassdoor.com IT professionals in the Miami – Fort Lauderdale area tend to earn between $47,000 and $115,000 per year, with the average hovering a little below $75,000. IT Professionals can become IT Managers as they advance in their careers. According to Salary.com, IT Managers in Miami tend to earn between $104,878 – $133,302, with an average of around $118,532.

While their peers are exploring IT, students in TechHire’s Game Design bootcamp are learning the basics of programming.

Students use specialized “blocks” — each representing a specific piece of code — to tell the computer to perform a specific action. In the same way that a computer programmer combines many lines of code to create a complex computer program, TechHire game development students combine many of these special code blocks to create computer games, with varying levels of complexity, depending on the intricacies of the students’ designs.

While the students do seem to be having fun designing games, this course provides them with far more than just fun and games.

TechHire game design students are learning the basics of computer programming, software engineering, and app development. These are three of the highest paid tech professions in our increasingly software-oriented age. Computer programmers work everywhere from Google to Disney to the US Federal Government. In Miami, software engineers tend to earn between $55k and $106k while IOS app developers tend to make between $54k and $103k.

Upon completion of the TechLaunch course materials, Game Development students will be prepared for Microsoft’s Introduction to Programming Using Block-Based Languages certification.

The TechHire.Miami program, spearheaded by community leaders like Mr. Girnun, has brought millions of dollars into the Miami tech education ecosystem. Through bootcamps like this one, TechHire is helping kids in underserved communities discover the wonders of tech. At the same time, they are bringing awareness and publicity to the difficulties that these students often face.

In an interview last week with NBC’s Ari Odzer, Girnun described these low-income high school bootcamps as a way to “close the economic divide — the divide that exists for minorities in tech,” by giving students a glimpse into the tech world, so that they “can really understand the opportunities that are available to them.”

Of course, the TechHire.Miami program is still in its infancy, so the long-term benefits are yet to be seen. Still, it’s hard not to get excited. Low-income high school coding bootcamps like these could have big implications for South Florida’s tech economy. Speaking with Ari Odzer last week, Mr. Girnun was optimistic, predicting that TechHire.Miami will have “a huge impact both for our community in the near term, and long term as Miami continues to evolve as a tech center.”